>Reached Mumbai about 12am. It was a tiring journey but it is always nice to touch Indian soil again. 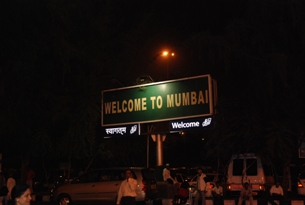 >We got to the hotel and our rooms – of course we were all sharing. Seeing Mumbai at that later hour was a good experience too. Mumbai never sleeps, so all members were amazed to see how many people were out and about. The hotel was very comfortable with AC and really large rooms. In the middle of Mumbai, that is a real luxury.

I think everyone was tired so slept well, I on the other hand was worried about tomorrow’s plan. My idea was take a tourist trip of Mumbai to see all the key places. This plan was shattered when I saw the bus we were going to be in. It was a minivan where two people at the back would be sitting with their heads near the ceiling. And the president of the college, Jim, would have to share the front seat with Maheshji (Bipin’s brother in law and our guide/contact etc) in Mumbai. So I had to change plans and go to Elephanta Caves the first day instead of the second day. Which really worked out great!!

>The day started with going to a restaurant to have breakfast. In India, there is no concept of breakfast included in lodging, so one has to go out of the hotel elsewhere to have breakfast. Our breakfast hangout, Shiv Saagar, was not far from our hotel. It had a variety of items, all from north Indian, south Indian to Bambaia dishes. It was the group’s first meal together, and it took me by a pleasant surprise how we ate. We shared our food, we tasted each other’s selections. It was just like a big family!! And that is how it was until the day we left. Our meals were an event on their own – very enjoyable, relaxed, adventurous and memorable. Which was a relief to me! Food is always the hardest part of any travel. As a vegetarian who has traveled the world, I know this first hand. And Indian food is so different from American food – the true east and west contrast.

The trip to Elephanta Caves involves going to Gateway of India and taking a one hour ferry boat ride to the island where the caves are. It worked out perfectly. We got to two great landmarks of Mumbai – the Gateway and Taj Hotel.

>The ferry trip itself was a really relaxing trip. We were 12 of us and were still getting to know each other. So it was a great opportunity to sit together or take a nap or just enjoy the boat ride – whatever one needed. 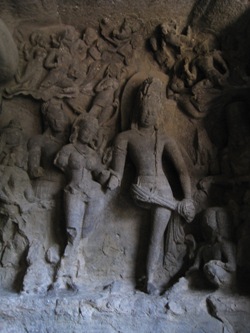 Elephanta caves were a bit of a walk inside the island. What I was not aware of was how many stairs we were going to have to climb to get to the caves. I was really impressed that all of us made it up! Going up the stairs were lined with gift shops. I had advised the group not to buy anything yet. Maybe that was a mistake – because sometimes you can find really unique things in such tourist places. But that was a minor mistake, even if it was. The caves themselves are more than 1000 years old. They are dedicated to Shiv-Parvati. During the Portuguese invasion they were used as target practice. There were many smaller caves which did not have many carvings. It took us more than 2 hours to see it all. We took a guided tour, and then we walked around on our own. The wildlife was ever present – the monkeys and the birds….

The climb down was much 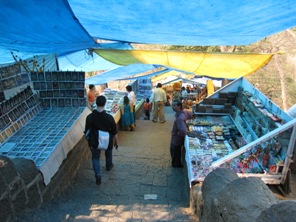 easier. We waited a bit for the ferry and then went back to Gateway of India. By this time it had gotten really hot. So the ferry ride was quite welcomed. I had read about the shopping behind the Taj hotel area, so we decided to take a walk there and I helped some of our group members negotiate/bargain a good price for some things that they wanted to buy. It was evening by this time we got done, so we decided to go for dinner. Dinner was at Shabri’s. It was the traditional muglai food (much better than restaurants in USA). Some of the students got to eat meat dishes (this was the only day we had anything non vegetarian). We then went to Natural’s for the best ice-cream!! What was really funny is more than half of the group ordered strawberry ice cream! So we had to have seconds with more variety of flavors – and the sharing began again….

Night could not have come at a more appropriate time, we were all ready for bed!