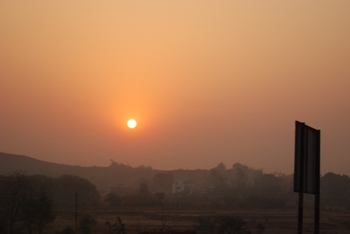 Next morning was going to be a really early rise since we were departing for Surat. We were told that the earlier we leave the better it will be for us regarding the traffic. We all managed to come down at 5 am sharp. Again, I am so impressed with this group!! We had just enough time for a cup of tea and then we started our 5 hour bus drive. It was nice that we had the same driver the entire trip also.

We stopped for a restroom break once and then directly at textile factory in Surat. The owner happened to be Bipin’s good friend. His wife had made good lunch spread for us. So we ate and talked for a while and then started the tour. There was too much cloth all around us. We were shown how the cloth came as white fabric, and was washed first and then sent to the factory for printing. The printing department was separate – they were the artists and creative people. Next was 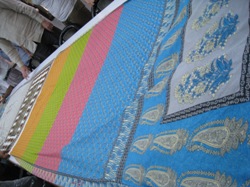 applying the design to form a template on a roller for printing. The roller would be taken to the factory for printing. All dyes were available and usually the printing was done in small scale to see what the fabric stores would want. They were shown samples and then decided which ones to make in large scale. The colors and designs were phenomenal. I would not have believed it if I had not seen with my own eyes how the samples were made. I still did not understand the dyeing process. Especially for more than one color. 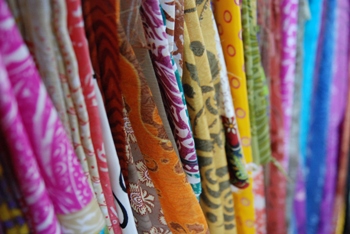 the factory. The only thing that was hard for the group members to see was the unsafe conditions in the factory, but the thing is that this is how it is in India. No one complains unless there is some real unsafe condition.

Surat is the textile and diamond capital of the world, so there was no way that we could not have visited these two industries. I was really lucky that Bipin was arranging everything, since he had really good friends and contacts everywhere. This trip would not have been possible financially or logistically if had not been for Bipin. So, thanks to Bipin’s contacts, we were able to visit this very unique place.

Amongst all the beggars, poverty and dirt there is this part of India which is rich, affluent and modern. The diamond industry was a place where diamonds were cut and polished. The owners bought the uncut diamonds and then did all the work and sold them to jewelers. We started out in a huge conference room which was spectacular with its huge glass top table. The owner, Vallabh Bhai, dealt with so many international businesses but did not speak English, and despite his wealth he was amazingly modest. We listened to his story while sipping on coconut water. Vallabh Bhai got started in the diamond business as a cutter, and then progressed slowly to own this huge diamond empire. He is one of the bigger diamond players in India. 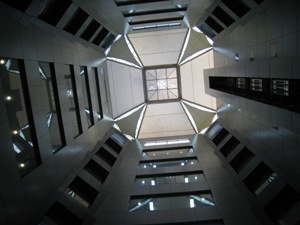 The building itself was very tall – more than 12 floors out of which a 2-3 were office floors and the rest were all dedicated to diamond cutting. The architectural design of the building was also cut like a diamond from inside, it was beautiful to look up and down the center of it. So the building was designed like a hollow square tube with offices all the four sides and hollow from top to bottom. We started from the top floor with the owner’s office. Wow – so clean and so empty. I think that is the goal – to keep it free of clutter so there are less hiding places. There was huge walk-in safe in the office. Every room was meticulous and clean with a purpose. The first place was where the diamonds came in. It was amazing to see so many diamonds in just plastic boxes as if there were nothing but pieces of glass! They were counted and then went on to be labeled individually so that each diamond can be tracked. The next few floors were cutting, some manual and some laser. There were more than a thousand employees working – all men. There was a strict code of work and safety there. Never at any time did I feel like I was being followed or watched but I am quite sure that security was being maintained.

From cutting it was to the computers where they made sure that the cut was uniform and if it wasn’t then back it went! (they would also know who was responsible for making the mistakes! Each diamond’s path was noted). We came down floor after floor of just diamond work. It was amazing. We finished the tour at the bottom of the building where there were huge posters of Sushmita Sen, their ambassador for their own jewelry shop, Kiah. All in all – really amazing!! Personally for me I know that I would never get to see such a place again in my lifetime. 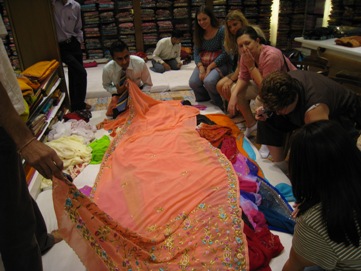 After all that we went shopping!! Bipin’s niece was kind enough to take us to one of clothing store where all the girls bought saris and boys again just hung around till we were done. I think this was also a great experience for the girls, just how the sales people show the saris and model them! Almost all the girls bought one sari. We took them next door so they could get blouses and petticoats stitched overnight.

Dinner was at a traditional Gujrati restaurant. Bipin was supposed to meet us there but he was running late so we just sat around. It turns out there were little shows going on here and there, so we saw two – one puppet show and one magic show. Both were so uniquely Indian and I could not have asked for a more traditional Indian experience for my group. Food was another story. The style was very traditional too – we all sat down with plates in front of us and the server would come and serve one thing at a time. The food was great for me, but a bit spicy for the American palette. I had to run around trying to explain what everything was. All in all – not bad. 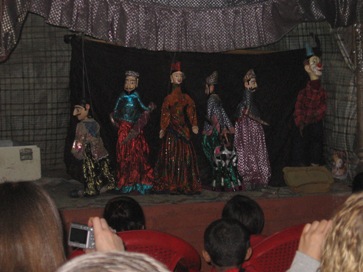 Time to have our nightly reflections. I had asked the graduate students to do reflections for three nights. We had been doing some talking in the bus also, but sitting in a house (not a hotel), was just very comfortable. Reflections that night were very productive. I was very happy that all of us were getting along well and actually loved each other’s company that we sat there longer than I had thought we would. It seems like we were always talking about something or the other.

Night was very good – I needed the rest. The ac was too strong for me so I had to shift to another room, but other than that – very nice!! Some of us chose to sleep on the floor. It was like camping!