For the fall 2004 semester, Dr. Ron Miriani and I created a new course, India: Its People, Culture and History to satisfy Park University’s mission of “prepar(ing) learners to think critically, communicate effectively and engage in lifelong learning while serving a global community.” As part of my Spring 2005 sabbatical, I visited India for three months to do more research for this course, and of course have fun, meet my relatives and visit new places.

India's natural beauty, unique architecture, ancient stories and ceremonies and the unbeatable diverse cuisine keeps me returning as often as I can travel. An Indian by birth, I grew up in Nigeria and moved back to India for my undergraduate and graduate work. After I moved to the United States in 1989, I visited India mainly to visit my family, but since creating this course with Dr. Miriani, I have begun touring extensively, gathering information and observations for this class. What I continue to learn has only buoyed by passion for India’s people, culture and history.

After the 24 hour trip and the 10 hour jet lag we, my father and I, decided to start our journey from Dehra Dun, my birthplace and hometown in a valley at the foot of the Himalayan mountains. My broad itinerary included visiting a number of pilgrimage sites (in the mountains, Rajasthan and Gujrat), palaces and forts of Rajasthan, temples in Karnatka and Madhya Pradesh. This was to be intermingled with visits to relatives and friends in the various places. We also planned to spend one week in an ashram in Rishikesh to experience the meditative and scholarly life.

Then we began an eight day pilgrimage in the Himalayas to see: 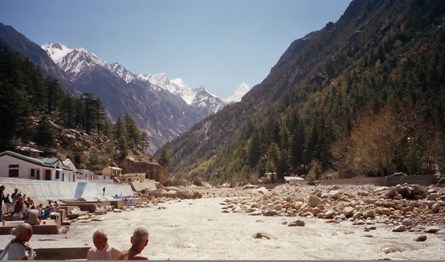 Amazingly enough, no one got ill and the car never broke down. Without those distractions, I was able to concentrate my energy on what I was experiencing. This was my first pilgrimage into the mountains. I wish I could accurately describe the beauty. I could not take a nap since I was so busy taking pictures. The mountain ranges kept coming one after another, and because of the summer temperatures, the snowmelt created wondrous waterfalls on the four rivers we saw. It was a truly unique experience I hope to repeat soon.

We then indulged our senses in an ashram in Rishkesh on the banks of the Ganges. I was fortunate to be there at a time when Geeta, the book on the philosophy of life was being taught. One week with Swami Atamand was not nearly enough to satisfy my curiosity of Geeta. It was a wonderful experience, and I would repeat it in a heartbeat.

From the snow-capped mountains we descended to the 110o F desert of Rajasthan. Some of the cities we went to were: 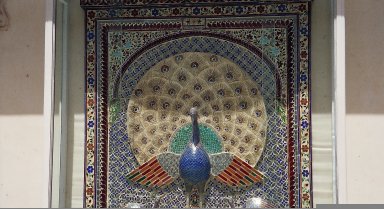 Some of the architectural differences of India are best represented by the forts and palaces built by the Hindu Rajas in Rajasthan and those built by the Mugals, Muslim rulers for 250 years, in Agra and Delhi. The indigenous elephants, camels and peacocks are represented in incredibly detailed mosaics in the palaces.

We also visited ancient temples in Ujjain (home of the Shiva temple for the Tantric followers) in Madhya Pradesh, which is in vast contrast to Bangalore – the ultimate east-meets-west culture clash. Here large British style buildings are cheek-to-jowl with Indian temples and American malls and restaurants. After and exhausting, but necessary, two day shopping excursion, we visited three temples outside the city. The temples: Shravanbelagola, a Jain temple; Belur, a Vishnu temple, and Halebidu, a Shiva temple were covered with jaw-dropping carvings and surrounded by walls, small buildings and statues that have been added to the original temples by the various kings that have ruled for the last six centuries.

We also managed to sneak a four day trip to Porbandar, Gujrat. This is the birthplace of Mahatma Gandhi. There are also two very important pilgrimage sites for Hindus at Somnath, used to be one of the richest Shiva temple, and Dwarka, site of Krisha's kingdom.

It is almost impossible to write about my entire experiences in such short space, however this I can say – India never ceases to amaze me. Despite the increasing population and environmental issues it keeps moving ahead at a steady pace. India is full of contradictions: it is as ancient as it is modern in architecture and culture; it has the local “dhabas” (restaurants for the common people) but it also has the American flare of Pizza Huts and McDonalds; its people may live with the conveniences of the modern times but they do not forget the ancient religious ceremonies that have governed their lives.

There are also several social organizations in India where Park students can do Service learning projects and experience the rich culture and beauty of India. I hope I am able to convey some insight on India to my students such that they may be able to visit it without feeling the cultural shock that most visitors feel.