The next day was planned for Mumbai University tour. I had communicated with a chemistry professor there to arrange a tour. We had breakfast of poha and tea at the hotel and drove to the university. It is a huge campus and very green with good landscaping. We went to the library and waited for the professor to come. But he never came! We walked around a bit and then sat in the library. Bipin suggested that we ourselves go and find the professor, so he and I went. The professor was acting like a big shot and did not even bother to apologize, or say a proper hello or anything. He called two of his graduate students to give us a campus tour. I was really infuriated at the professor. We were all academicians and he did not think of treating us like we were worth his time. And this too after I had been communicating with him for over two months!! 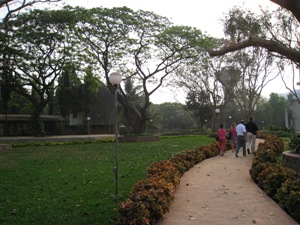 His graduate students on the other hand gave us a good campus tour. They took us to the music/theater department which is known for having great actors as instructors. They had good literature and good PR. We stopped at the registrar’s office, a lecture hall, chemistry instrument room (which was quite good except I don’t think all MU students really get to use those instruments, only the techs can). We walked all around and it was getting quite hot now!! We then had lunch at the university canteen (my idea! I 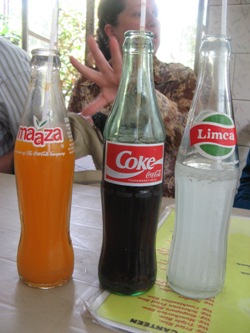 wanted them to see what kind of food canteens have and how university canteens work). Great experience! And yet again, we had a variety of dishes, all quite tasty, along with some traditional Indian drinks like Maaza mango and Limca. Here the Chinese member ordered the Chinese dish on the menu :-) Of course, he did not realize that Indians have Indianized the Chinese dishes!

We said our goodbyes to the students. I think the group members and these two students bonded well. It was nice to see it!

On the way back we got a surprise, somehow Bipin had arranged for a tour at the Glucose Biscuit factory. Glucose biscuits are of course an Indian icon! And the factory tour was the cutest of all tours! They had nice welcoming plaques. We were the only group touring so we did not have to wait long. The factory was used to giving regular 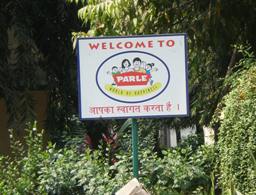 tours so it was really very visitor friendly. It was really interesting to see how the flour got turned into dough and then spread into biscuits, baked and then packaged. They are the cheapest, most filling little snacks. On the way out we were all given a hot "off the oven" packet of biscuits. I think Glucose biscuits just got 11 new fans and customers! (The whole tour took less than an hour).

When we got back to the hotel and were told that we had to vacate as they had overbooked. Well…no problem, Bipin made arrangements at another hotel nearby, Hotel Columbus. We had to compress even more now, all the girls, seven of us were divided in two rooms, and the boys got their room. We had the afternoon free for a while so I decided to go separately with one of the students to the shops, while all the other girls went for their own shopping. The boys stayed in. It was a nice way to spend the afternoon.

I was pleasantly surprised when the girls came back with bag full of clothes. They managed to find the right shops and negotiate the right price. And they got really good clothes also. I don't think I will understand the young American male. I don't know what they like to do. I have not seen guys talk like these guys on this trip. (In a way it is kind of amusing).

For the evening I had planned for a live theater/play outing. The play, called “All About Women”, was in the Prithvi Theater and since it was in English. I thought it would a great way for our group to see Indian drama style, since SU itself is big in theater and music programs. The theater was in Juhu so we left in the evening to first walk on Juhu beach. It was almost dark, so we could not see too much of the 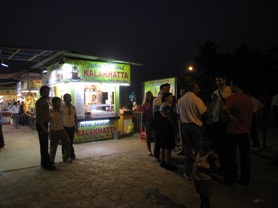 ocean but still it was a nice walk. The beach is quite nice. All the food stalls have been localized in one place so that the beaches can stay clean. There were still many hawkers selling stuff and it is really hard to get rid of them.

This was also the first time that the group got exposed to children begging. It was really hard for some of the group members to see the kids begging. I had instructed them very strongly not to give any money and again they did me a huge favor by listening to me, otherwise we would have a big sea of beggars. That is the sad part of Indian life. Especially since Juhu is also the richest part of Mumbai.

We had dinner at Radisson hotel. It was a buffet style dinner – little pricey but such tasty food. There were so many choices of all kinds of dishes, all vegetarian of course.

The theater was not far from the hotel. The play started at 9pm. The play itself was a little out of norm from Indian standards. The language was crude and theme very western. But it still touched all the aspects of women's life and dilemmas of all ages and all walks of life. The actors were all women showing five story lines of the different generations of women. Some parts of it were really out there as far as Indian culture is concerned but then again, we were sitting in Juhu in Mumbai. The play lasted two hours and then we drove back. We were exhausted!

Reflections can happen another day.....