Next day was the plan the go to Lonavala’s for a trip to Vedanta Academy. I chose this so that the group could see that amongst all the materialism there is this spiritual side to India. I also know in my heart that a number of these things that I am showing the group will not have an immediate effect. But they will remember this ten years from now and say – oh yeah! We went to this great place outside Mumbai which was so quiet and away from the hustle bustle of Mumbai.

There are also some Buddhist caves in Lonavala. So the plan was to go to the academy first and then see the caves.

Again without knowing, this decision was great to get out of Mumbai the next day. Mumbai is so crowded that it was really hard to get around. So it was nice to get outside in the open space. We spent so much time in the bus!! Oh – and yes Bipin ended up getting us a bigger bus, definitely much better and more comfortable, with plenty of seats and had AC!! A must in Mumbai.

So kind of early in the morning, without breakfast, we left for Lonavala. We slept a bit on the way and the rest we looked out and talked! The landscape changed as we went further away from Mumbai. We were now in the Western Ghats, all mountains, and an occasional waterfall, if one could see it. It was a nice drive. 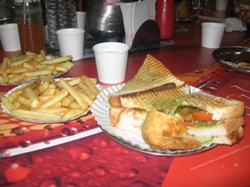 We stopped in the rest area for bathroom break and breakfast break. This rest area was great! It had a good rest area and a few shops and a great restaurant for breakfast. We sat in the AC room inside and yet again we experimented with all the food items. The restaurant had a great ambience. The tables were quite creative and we were in no hurry. It was yet another good meal time. Here the group tried some sandwiches and French fries.

In another 30 mins we reached Lonavala and managed to find the ashram. It was really out there in the middle of nowhere, so yes, it was very peaceful. We met with some students there. We first got a nice introduction to Swami Parthasarthy’s philosophy in a movie format. We all sat on the floor and just watched the DVD. (He has a nice philosophy on life – all about separating oneself from materialism and none of the religion). 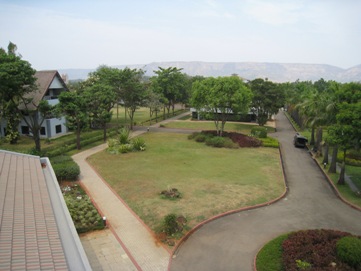 We then got a tour of the facilities. The academy actually is a school where students live and learn for three years, then they go out and teach the Vedant philosophy, or live life according to the philosophy. The student’s residences were separated into mens and womens and then there was a whole guest house. The Swami also hosts guests who can live there for a while and attend classes or they come for short courses/workshops. It was a nice big campus, very self sufficient and beautifully maintained with greenery and its own vegetable garden.

After the tour we had lunch in their mess hall. It was buffet type of five simple preparations – all vegetarian. That was another thing the group was getting used to: vegetarian food. They were amazed that there could be so much vegetarian food possible! The lunch was very tasty. We had to wash our own dishes after the meal, of course.

After lunch we went for a small lecture presented by one of the student’s of the academy. It was about one hour long and not bad at all. He spoke excellent English and explained Vedant philosophy very well. Since he was a student, his knowledge was limited. We all got to ask questions and participate.

We did buy some books and donated some money to the academy.

Around 3 pm we left for Karla caves, which were about 3 miles from the academy. These caves were Buddhist caves made about 1 century BC. What we were not aware of is how many stairs we would have to climb again!! The president, Jim, and one student, gave up at this point. Just yesterday we had climbed to the Elephanta caves. For some of us also it was challenging, but we really wanted to see the caves. So we went up, one stair at a time! There is also a temple on the top so there were many puja shops on the way. We did not stop anywhere until we reached the top. 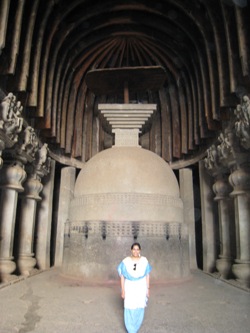 It was worth the climb. The caves were not all decorated. It seems that some of them may have been living quarters. The main cave was actually a hall which had two rows of high pillars and a stupa in the middle of the hall.

At the entrance and inside the walls were carved beautifully with elephants and human figurines. 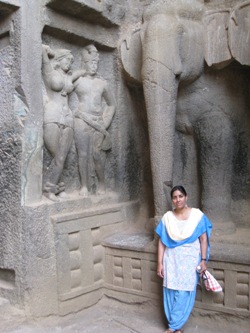 The group really liked it all. “The cave” was a big hall. All the pillars in it were decorated and the stupa in the back of the hall was huge. We took some good pictures and then went on to walk around the mountain. The view was very nice, one could see the whole earth as far as possible. It was all brown though, there was not too much greenery. But still it was a beautiful day and we were just enjoying taking pictures and exploring. Soon after we left and began the trek down. It was a nice 20 mins walk. We bought some water and snack from the store below and started the drive back. The scenery was still pretty but we were busy taking naps and resting.

We reached Mumbai by 7ish and it was night by then. We went to our rooms to refresh and left soon for dinner at Shiv Saagar for traditional Mumbai food – paav bhaajhi, which was great. Some of the group member were feeling nostalgic so they tried nachos. Well, obviously they were not going to be good! But I completely understand wanting to have something familiar after a few days of eating foreign food.

We had a reflection session in my room. I was always impressed by this group – they always listened to me and did things that were good for the group and not just themselves. They were flexible, tolerant and adventurous. The reflection session was good, even the president came. I should mention that I was impressed by his resilience and adjustment too. Although at times I felt he could not get past his own prejudices but I know he was doing his best to be open minded. He had admitted at some point in the trip that he had always been afraid of coming to India.